Breakfast is often a little early to be entertaining but some how pushing it back an hour or two and calling it brunch is actually quite perfect. This recipe is a great one to pop on the table as an alternative to fresh cut fruit after your savoury eats. And yes you definitely need a glass of sparkling with it!

We used Peaches and Apricots as that’s what was ripe on the day but feel free to grab whichever stone fruit make you happy. Quark is a soft fresh cheese made of cows milk. It’s a touch sour and really thick and just divine with this dish. Feel free to substitute with thick yoghurt if you have trouble finding it.

Set the oven to 180C and grab a couple of trays or roasting dishes.

The Almond and Cinnamon Crunch can be made and set aside first. Combine the flour and almond meal and rub the butter into it until its no longer lumpy. Add in cinnamon to taste and the sugar. Place a sheet of baking paper on a tray and scatter the mixture in an even crumbly layer. Bake for around 10 minutes or until it is becoming lightly coloured. Set aside to cool. (this can be prepared days in advance and stored in an airtight container.

Now to prepare the fruit. Essentially you take a small sharp knife and run it around the fruit along the natural seam then twist to separate the halves. Watch this clip HERE if you are not 100% sure. We essentially want nice halves and quarters with no pip to roast.

Add the fruit into a roasting tray cut side up and add your cinnamon sticks, star anise and a moderate scattering of brown sugar. A little lemon zest or fresh thyme would be nice too.

Bake for around 20 minutes or until you start to see the fruit almost collapsing a little and the sweet juices pooling in the pip holes. Set aside to cool to room temperature. (you can serve these chilled and prepare days in advance if you like too)

Add some vanilla bean paste or scraped seeds from a fresh pod into your Quark and mix well.

Take a nice platter and pile your Quark down the centre of the plate. Using a lifter or serving spoon, pile on the roasted fruit. Scatter on some of the crumbled Almond and Cinnamon Crunch. Drizzle any remaining juices from the fruit on the top.

Top with some Honey Flavour Pearls and enjoy.

from the Peninsula Larder Team 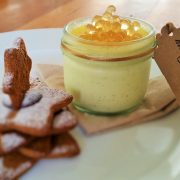 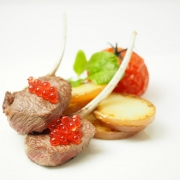 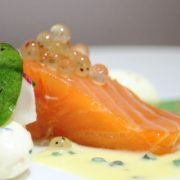 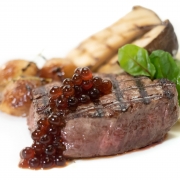 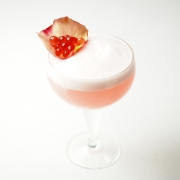 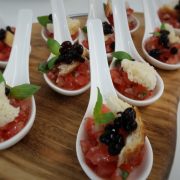 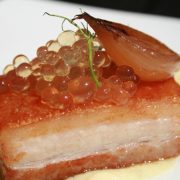